The evolution of a recipe

The evolution of a recipe

For about ten or twelves years now, I’ve been using a recipe from a cooking magazine to make the annual Christmas pudding. It’s a Valli Little recipe, and I suspect I’d pulled it out of an edition of Delicious, something I’ve subscribed to for years.

The recipe is a tropical fruit pudding, something just a little different to the traditional but with the same fundamental foundations. Loads of dried fruit and loads of booze.

It is an absolute winner of a pud.

I’m fairly sure I would have followed the recipe methodically the first time round, but if I’m honest that would have been the one and only time! Even though the recipe is still there in my folder of festive recipes, butter smeared and rum splashed as it is, I’m very fast and loose with it these days.

Every year I tweak, I adjust, I tinker.

At first it was the type alcohol. And probably the amount too if I’ve honest.

Then it was playing with desiccated coconut as the binder, in place of breadcrumbs.

Every year the mix of fruit changes.

Last year I even included lots of dried kumquats from our own laden tree.

This year I’ve gone even further. I decided to up the ante on quality local produce and on the experimentation.

The uber-talented Claire Parry from Wattle Tree Creek gave me freeze dried finger limes and Davidson Plum powder to experiment with, so they’ve both gone in.

And I decided to crack a bottle of the exceptional Pure Cane from the good folk at Husk for the grog component.

And my plan this year is to forgo the sour cream the recipe says to serve with the pudding, and replace it with something from Debbie at Cheeses Loves You. Maybe a crème fraiche or perhaps a tart kefir. I’ll see what Debbie thinks!

I made the pudding a few days ago and it looks and smells sublime. It’s got a few months now to mature and generally do its thing and I have to hope that my experimentation has worked. 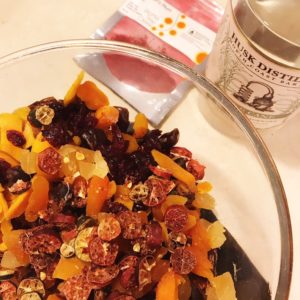 Of course, the problem will be that I never write down quantities or exact details so even if it does work, next year’s Christmas dessert will be yet another step in the ongoing evolution of a recipe!

The one thing I know is that the pudding will always be made with festive spirit and the produce of real people making real food at real places.

Brooklet Springs Farm from Table Under a Tree on Vimeo.

Chesses Loves You from Table Under a Tree on Vimeo.

Hayters Hill Beef from Table Under a Tree on Vimeo.

Life and death on the farm

Due to the ongoing COVID-19 crisis, we have had to cease our usual operations and unfortunately we are currently unable to offer farm and market tours. However we can still provide delivery of the Hinterland’s best produce to locals and those visiting our region. There is no better time to enjoy and benefit from the food from our local, small-scale farmers, producers and growers.

Find all the information about the Market Pods, including how to order by clicking right here.